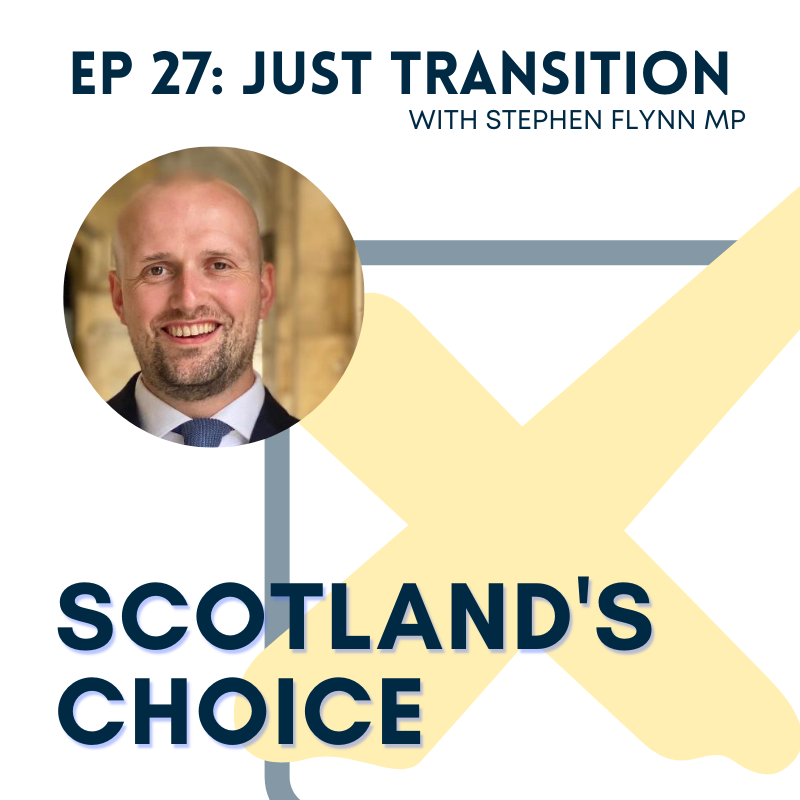 The Just Transition. Everyone will have heard the phrase, and many will have at least a vague idea of the meaning behind it. But, looking in-depth and in specific terms, what do politicians mean when they talk about it?

Stephen Flynn MP is the SNP’s Energy spokesperson at Westminster and so is well-versed in the subject of the Just Transition. In this episode of Scotland’s Choice he and host Drew Hendry MP discuss why this area of policy is important.

In short, the just transition means the process of moving away from dependency on fossil fuels towards renewables. Crucially, though, this must be done in a just manner, one that minimises job losses and economic damage. We have seen a transition before, but it was anything but just. In the second half of the 20th century, coal mines were rapidly shut down leaving workers out of a job and leading to an unemployment crisis.

Not only is Stephen the SNP’s Energy Spokesperson, he represents a constituency that relies on us getting this transition right – Aberdeen South. Aberdeen and its surrounding areas have, for decades, benefitted from Scotland’s offshore resources. Proponents of the just transition argue that these jobs do need to be lost when we stop drilling for oil. There will be a huge demand for jobs in the renewables sector, we just have to provide the training to reskill these critical workers. And the work has already started. 87% of workers that have been signed up to the Scottish Government’s Just Transition Training programme have been successfully retrained – it can be done.

The UK Government is dragging its heels on the matter. And promises made after the 2014 referendum are already being broken. Just look at the funding promised for the carbon capture facility in the North East.

There is much more detail and discussion in the full episode, listen now!