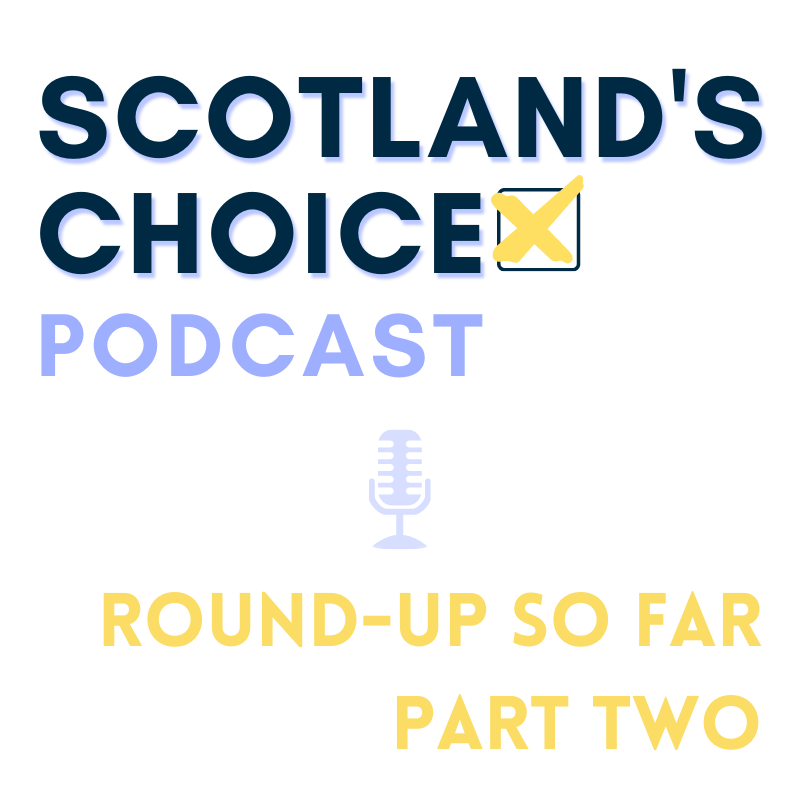 Part Two of a Compilation of Scotland’s Choice.

Following on from last week’s episode, we’re continuing with a selection of Scotland’s Choice so far. With 13 episodes worth of content to choose from, it’s not an easy task to pick standout moments for an episode such as this. The thinking was to condense some of the topics down into bitesize chunks alongside other clips. This makes for a great starter episode for first-time listeners. We’d encourage you to show this episode (along with Part One) to people who may not be aware of this podcast.

Kicking things off in the second round-up so far special is Michael Sturrock. Michael voted No in the 2014 referendum but has since changed his mind. He founded the website NoToYes.vote last year, and shares, with Drew, his reasons for voting No and what’s changed. Leading on from that, Drew asks Michael how he thinks we should engage with so-called soft no voters and how we help change their minds.

From one Michael to another, the second guest on this special is SNP party president, Mike Russell. Mike’s recently been named the director of the SNP’s independence unit and so is one of the best people to talk to with regards to the upcoming campaigns. In particular, he gives his thoughts on what to expect from the Westminster-driven unionist campaign.

Then, we have an excerpt from the discussion between Drew and guests Alison Thewliss MP and Roger Mullin. The entirety of Episode 10 is well worth a listen if you haven’t already had the chance to do so. The clip we’ve chosen for this compilation of Scotland’s Choice so far is a segment on currency. Namely, what would happen post-independence, and are some of the arguments around it just myths?

Finally, Deidre Brock MP gives her views on the UK Government’s attitude to climate change and the upcoming COP26 conference. As well as this, Drew asks her what Scotland’s ambitions are for renewables. As SNP’s COP26 Spokesperson and SNP Spokesperson for the Environment, Food and Rural Affairs, she has a few things to say!

Of course, the clips in this round-up of Scotland’s Choice so far don’t exhaust the arguments. Far from it. We’d recommend you go back to the source episodes and listen in for the full discussion if you’ve been interested in anything the guests had to say.