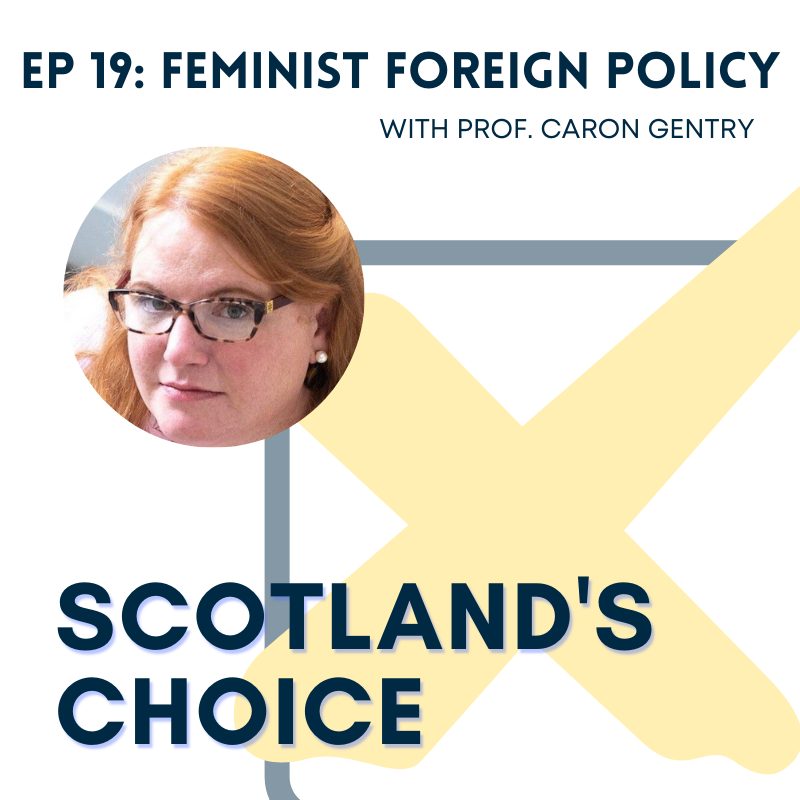 The feminist foreign policy is the topic we’re covering this week on the Scotland’s Choice podcast. Joining host Drew Hendry MP, is one of the leading voices in the matter, Prof. Caron E. Gentry. Caron is currently a Professor in the School of International Relations at the University of St Andrews. Her main research focuses on gender and terrorism as well as feminist political theology.  Her interest in Feminist Foreign Policy stems from her work on theology, particularly as it pertains to hopeful practices.

The influence that feminism can have on policies, both domestic and foreign, should not be underestimated. This idea is not a new one by any means. Sweden has adopted an approach that is a step in the right direction, but Caron makes the point that most feminists say it doesn’t go far enough.

So, what’s the difference between the current patriarchal system, and that of a feminist foreign policy. Caron argues that instead of treating economics as a competition, it becomes more collaborative. And instead of being isolationist, typically you see a desire to become more cosmopolitan and supportive of refugees.

So, where does this leave boys and men? The idea of a feminist foreign policy isn’t about excluding those who don’t identify as women from policymaking. Rather, it chooses to prioritise collaborative effort, among other things, ahead of traditional, masculine posturing.

An important question to consider is can a feminist foreign policy help an Independent Scotland lead on a global stage with greater empathy and open-mindedness? Caron says that independence brings an opportunity for Scotland to reinvent itself and choose different priorities than the ones imposed on us by Westminster currently. A good example of this would be Scotland choosing not to spend billions of pounds on weapons of mass destruction.

Listen to the full episode for all of the above and more.